Success Story of Shri I. Metrik Singh of Mayang Imphal 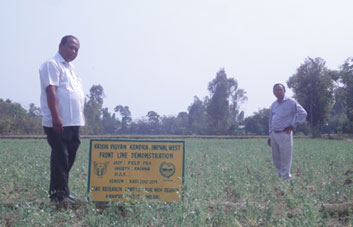 During the year, 2012-13, Shri I. Metrik Singh of Mayang Imphal, Kokchai Village was adopted under the Rabi Pulse, and he was given inputs of 75 Kg of pea seeds (var. Rachana) for one hectare. During this Rabi season, rainfall was very scanty. Therefore moisture conservation techniques were also introduced. Ploughing followed by immediate planking to conserve moisture was practiced and mulching was done with paddy straw. Such moisture conservation practices were introduced for the first time in the village by K.V.K. though there was scanty rainfall during the season germination and initial growth was satisfactory. 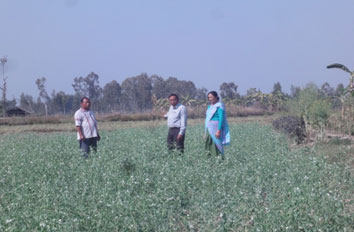 Now Shri I. Metrik Singh had successfully shown that even during dry spell satisfactory yield could be achieved through adoption of scientific moisture conservation techniques. 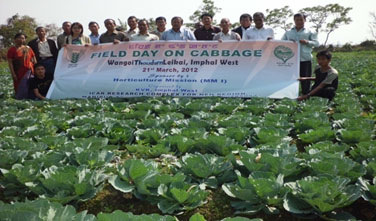 Shri Potsangbam Manaobi Singh (48yrs) S/o Shri P. Ahanjao Singh of Wangoi Thoudam Leikai, Imphal West district is a progressive hybrid cabbage farmer. He is under matric. He was adopted under hybrid cabbage cultivation programme of KVK-IW since 2007 rabi season. He has attended 7-8 training programme. He was always eager to learn and practice new ideas. He also got first prize in the State Level Agril. Exhibition organized by State Agriculture Department(SAMETI) in the year 2009 and his field was also visited by His Excellency Governor of Manipur Shri Gurbachan Jagat.

Mr. Manaobi used to grow cabbage in early mid and late seasons. He frequently consulted KVK-IW Horticulture for advice. He has a small polyhouse (15’x10’) where he used to raise cabbage nursery.

Mr. Manaobi owns 2.0 ha of land a pond of 65’x65’size from which cabbage plants were irrigated with water pump set. He also has two mulching cows. The cow dung is used in making FYM. He has extended his expertise in hybrid cabbage production to other farmers of his village at least in two localities. He started using neem leaves with cow urine for the last three years. He could get maximum net income or Rs. 2,03,000.00 during 2012-30. He started hybrid cabbage production from 2007 in an area of 0.25 ha. In the later years, his progress in cabbage farming grew and so his income increased. Details of the income are given below. 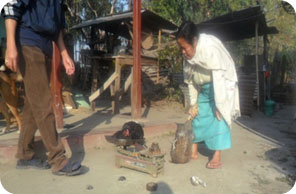 Smt. Kh. Kulapati Devi from Khurkhul village, Imphal West District, Manipur maintained about 50 non-descript/ local hens for egg production. It was estimated that the average egg production of her hens to be 70 eggs/hen/year from that non-descript birds. Her earning was very meager and not enough for day-to-day family maintenance. She faced a critical financial hardship for liveliood as her youngest son was also doing post-graduate studies.

In an interaction with our KVK staff during a vaccination programme, she requested for a health check –up for her local birds and expressed her desire to avail a vocational trainingprogramme to be conducted by our staff on Backyard poultry production. 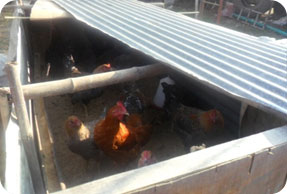 As desired, training programme on Management of small poultry units using improved variety i.e. Vanaraja was conducted and she was well-trained and given expose to the rearing of Vanaraja, a dual purpose and multi-coloured chicken suitable for rural poultry farming with a potential to produce 100% more eggs of 13-15 g heavier weight as compared to non-descript/local breed under scavenger system of management.

After being trained, 40 Vanaraja grown up (6 weeks old) birds in a sex ratio of 1:5 were supplied to her at a minimal rate of Rs. 55/bird from the centre. She expanded her unit, however, morality of 2(two) hens were recorded during the year. Now her birds had completed 70 weeks. The birds were provided with locally available feed ingredients like rice bran, alternantheramounginoides(kabonappi),vegetables leaves (cabbage, cauliflower), waste rice, wild lettuce, and egg shell. 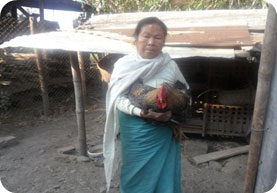 It was estimated that the hen consumed 90 g homemade feed in a day besides free scavenging. As such in an average daily expenditure on feed for a bird (value in Rupees) is approximatelyRs. 2.50 p during the period.

Regarding health management Tetracycline, Sulphadrugs, piperazine liquid at 2-3 months intervals was advocated under the supervision of Animal Science discipline of KVK. The estimated performance of this breed as observed at her unit in the following attributes as the female matured (sex) at 168 (average) and laid tinted brown 154 eggs/hen/year under semi scavenge system of housing. The average egg weight recorded was 58 g with a hatchability record 65% on total eggs set (TES). The average body weight adult birds were estimated about 4.0 kg and 3.0 kg for male and female respectively. She also supplied hatching eggs to the interested poultry raisers @ Rs. 8/egg and also managed to incubate the hatching eggs and chicks so produced were sold to other mates @ Rs.22/ day old chicks. She disposed spent birds @Rs. 140/kg live body weight at her doorstep.

Economics of the unit during the year is calculated as below:

Now she could earn an average income supplement of Rs. 1565.5/month.Before adoption by KVK Imphal West she used to rear local breed which hardly gave an income of Rs. 680.00 per month.