Cultivation of groundnut, an oilseed crop becomes popular in the villages of Imphal West district. Now most of the farmers desired to include groundnut in their cropping system as this is more profitable. Due to suitability and profitability as compared to other crops, the groundnut is grown in this village in the hills and foothills. Though the groundnut was cultivated since time immemorial, but farmers left the crop some years due to use of local varieties as it was low yielder.

The KVK staffs of Imphal West district of Manipur had attempted to introduce and popularise a new variety ICGS-76 of groundnut, which is high yielding and suitable for Manipur condition with easy marketable for more profit margin. 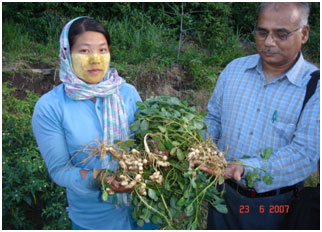 During the year 2006, under FLD programme some farmers were selected and provided technical know-how along with critical inputs. Among the farmers, one farmer named Smt A. Tharik Devi aged 40 years resident of Tairenpokpi village (SC village) was selected under FLD groundnut for one acre. Because of her sincerity, laborious and adoption of improved technologies for seed production transferred by the KVK staffs through training, demonstrations, method demonstrations, she was able to get pure seed with proper storage methods and kept to use for the next kharifseason. 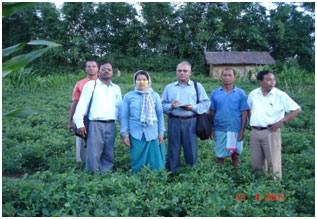 Dr. M.S. Basu, Director NRCG Junagadh with the KVK staffs in the field.

Now, she herself developed an innovative idea to escape Tikka diseases and insect-pests, by utilizing the fallow land during off-season and increase the work generation. Therefore, she had sown the seed in early season in the month of 2nd week of March,07 as pre-kharif groundnut from previous own saved seed by following seed production package of practices.  The groundnut crop was harvested in the month of August 2007 with the yield of 11.15q/ha. Besides, the groundnut to earn additional income, she had grown 2000 maize plant( Var. Pusa composite-3) around her groundnut plots comprising an area of an acre. She increased the cropping intensity by practising crop rotation, e.g. groundnut followed by tomato. By doing this cropping system she could earned Rs.17,000/- in a year from maize and groundnut in one acre. That means she could earned Rs.42,500/- in a year from one hectare.

Further, she feels that the innovative idea developed by herself found success and achieved as the groundnut crop was free from diseases, utilized the fallow land and earned additional income to assist her family management. Moreover, the technologies followed by her is replicated to other surrounding and adjoining villages also. Now the cropping intensity has been increased.

Fisheries and aquaculture have immense potential in Manipur covering an area of 1 lakh hectare with production potential 56,500 ton/ annum. But the state has produce only 18,000 ton/annum with an average production 2ton/ha.
Therefore an attempt has been made in collaboration with CIFA, Bhubaneswar to increase the fish production through scientific management. Composite fish farming with higher stocking density (advance fingerling 18000 nos/ha), aeration facility and pelleted feed was demonstrated to Mr. Dhanabir Singh of NingobamMayaiLekai and Imphal West district. Because of our proper guideline and his tremendous effort, he was able to produce a record production of 12 ton from 1ha water body.

Shri, Shyamkumar Singh, a newspaper hawker by occupation in Shamushang village, Imphal West district undergone training on Vanaraja poultry and established a poultry farm with capacity of 500 parent stock in collaboration with the KVK. Now he is supplying days old chicks to 30 days old chicks to the poultry farmers in the district. His average monthly net income is Rs.13200 per month besides employing two daily casual labours in his business. In addition he is playing a major role in popularization Vanaraja poultry in the district. However, his farm is totally non operational since June 2007 due to the outbreak of Bird flue and hoping for revival at the earliest. 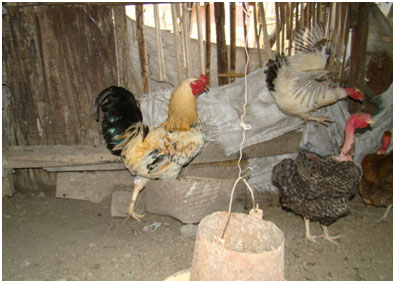