Monocropping of rice is a common farming system in Imphal west district although double cropping is also practiced in few irrigated pockets. It resulted into low cropping intensity of 102 per cent in the district. The reason being lack of irrigation facilities and awareness among the farmers of moisture stress tolerant crops. The practice of zero tillage with local zella variety is a common practice in Kakching village in Thoubal district. The system is only confined in that village and no attempt has been made to replicate the same in other parts of the state. Preliminary survey by the Scientist of ICAR revealed that under this practice the crop thrives well even without irrigation /winter showers. Realizing the fact, KVK, Imphal West attempted the technology in Imphal West district in the form of OFTs and FLDs since rabi 2000. 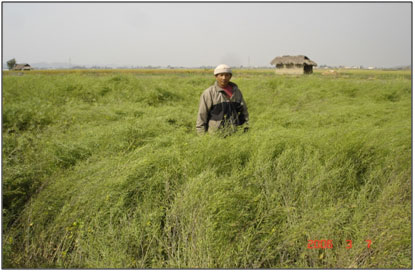 The local cultivar Yella could give maximum yield of 11 q /ha with an average of 5 q/ha where as improved variety M-27 gave an average yield of 10 q/ha and maximum yield of 16q/ha which is much higher than its potential yield i.e. 12 q/ha. Cultivation of improved variety M-27 could realize a net profit of Rs. 12990.00/ha. Now, because of the intervention of KVK, Imphal West, about 800 ha area are brought under zero tillage in the district. More than 10 oilseed mills have been installed so far after the popularization of the technology. The local variety yella have been replaced with M-27 even in the Kakching areas and other parts of the state. Now the zero tillage rapeseed have been extended to more than 10,000 ha in the state. The farmers as well the state government is applauding the role of KVK Imphal West in popularizing zero tillage rapeseed in the state of Manipur.

Introduction and popularization of Turmeric variety Megha Turmeric in Manipur

Turmeric, one of the major spice crops of Manipur has great potential for its cultivation in the foot hills and in the upland areas of Manipur. The crop is popularly grown in hill districts of the state. In such a situation, KVK has been introducing from 2003, a turmeric variety Megha turmeric evolved by ICAR at Umiam, Meghalaya in the form of OFT and FLDs. It is a selection of local variety known as Lakadang from Meghalaya. This variety is performing very well at the foot hills of Imphal West District. ShriLaishramDhenu Singh of Ngairangbam village, ShriKh. Brojendro Singh of AwangPotsangbamare some of the individual progressive farmers of Megha turmeric. In the year 2003 ShriGojendro Singh started growing Megha turmeric with 30 kg seed only and expanded to an area of 1120 sqm (0.1 ha). Likewise ShriDhenu Singh has also earned a sum of Rs. 30,000/- for selling 600 kg of turmeric powder @ Rs. 50.00 per kg from an area of 0.1 ha. 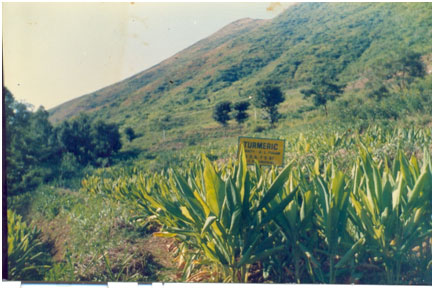