Cultivation of groundnut is unpopular and unknown in some villages of Imphal West District. This may be due to unavailability of production technology of groundnut and suitable variety of groundnut in Manipur condition. But there is an ample scope of groundnut crop as the area of foothills is lying and kept fallow. 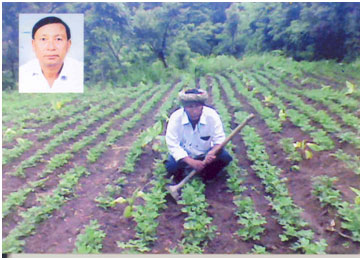 By observing the situation an attempt was made to popularize the production of groundnut by recommending the package and practices in the villages of Sangaithel, Kachikhul and KhumanYangdong which are located on the foot hills adjoining valley of Imphal West. For introducing and popularizing a training programme on seed production in groundnut variety ICGS-76 was organised and conducted at village itself in which 10 farmers were participated from the three villages. During the training programme they were motivated to follow the transfertechnology of groundnut and to grow the variety ICGS-76 which is recommended for Manipur.

Among the 10 farmers, Shri  Y. Ibochou Singh aged 50 years of Karong  village who is a hard worker sincere in farming and adoptive in nature could  produce 18q/ha which is nearest to potential yield of groundnut.Shri  Y. Ibochou Singh is one of the beneficiaries of kharif 2008 of Front Line Demonstration. Hence groundnut seed variety ICGS-76 was given to him as a critical input for one hectare. He has 3 sons (one graduate and two under graduate).

Now Shri I. Ibochou Sing is the pioneer of three villages and many farmers of adjoining villages contacted him and booked his products of groundnut seed variety ICGS-76 as seed for the next kharif season which is not easily available in Manipur. Because of him the cultivated area of groundnut variety ICGS-76 had increased in the surrounding villages and popularized the high yielding variety of ICGS-76.