Fish culture in paddy fields is an ancient farming practice found in several rice-growing areas of north eastern states of India. In a populous country like India, where the per capita availability of land and water resources is going down, the need of the hour is a vertical growth in food gain production without endangering ecological assets. Therefore, integrated farming system along with fish can provide both food security to rural farmers and livelihood security to the rural work force on an economically sustainable basis.

In the hill states of north-eastern region, the introduction of paddy-cum-fish culture technique may be of considerable significance, considering their poor economic, poor returns from agricultural lands, existing mono cropping and intense pressure on valley lands besides the high price of fish in local markets. In this present context, it is very much essential to find out solution related to identification of suitable paddy varieties, standardization of stocking density of fish on its growth, survibility and total production, effect of manuring on fish growth, effect of supplementary feeding and effect of altitudes on growth of fish etc.

The ecology of the rice fields in the region is quite diverse but can be divided primarily into upland, low-land and deep water rice ecosystem. In this region of the country, a fish crop is traditionally raised only from the paddy of rain fed low lands (both shallow and deep water). Traditional rice fish production systems have an important socio-economic past in the life of the farmer and fisher in the region.

One demonstration was conducted at Imphal of Manipur which comes under valley during kharif season in the year 2007. An area of 3750 m2 of cultivable land was taken for paddy-fish farming. The peripheral dyke height of the paddy plot was 1.5 ft where no additional trench was constructed for fish rearing. One side of the paddy plot was little deepened for more water holding capacity in the paddy plot. In the month of February, dry ploughing was done and paddy straw were spread over the plot and kept upto the month of April. After the onset of monsoon towards the end of the April, puddling of the paddy plot was done with the help of a tractor. Again in the first week of May, puddling was done with the help of power tiller and leveling of the plot was done. After that direct sowing of 40 kg paddy seeds of variety KD-263 were done. After 15 days of sowing, fertilizers like DAP – 30 kg and Urea – 15 kg were applied. After 15 days of inorganic fertilizer application, de-weeding and gap filling was done. Spacing with 15 to 20 cm was maintained. The water height of 1 to 1.5 ft was maintained during the culture period. After 5 days of the gap filling, insecticides, Novacron-100 ml and Endosulphan - 100 ml were applied over the paddy plot. After 21 days of paddy sowing, when the residual effect of insecticides reduced, 1500 nos. of Common carp, Cyprinuscarpio fry at the stocking density of 4000 nos/ha of 2.5 to 3.0 cm in size and 3 to 4 gmin weight was stocked. After 15 days of fry stocking, organic manure raw cow dung of 100 kg was applied in the paddy plot and it was repeated twice again in 15days interval. 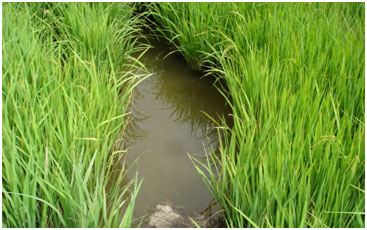 Figure . A rice-fish farming system in valley of Manipur

At the end of the August inorganic fertilizer, Urea-25kg and MOP-15Kg was applied again in the paddy plots. In the first week of October, paddy and fishes were harvested. The total paddy cultivation period was 150 days and fish culture of 100days.No supplementary feed was provided for feeding of fish and the feeding was entirely dependent on the natural food available in the paddy plots. A total of 1220 nos of fishes were harvested of varying size of 9cm to 14cm and 100gm to 300gm of weight in 100 days of culture period in the paddy field with 81% survibility. A total of 208 kg of fish was harvested @ 560 kg/ha. Paddy of 2.22 ton of was harvested from the plot @ 6.0 ton/ha. Rs14, 000/- was generated from the paddy cultivation, whereas an additional income of Rs 15,000/- was generated from fish culture in the paddy field without any additional expenditure for inputs for fish farming except fish seed. 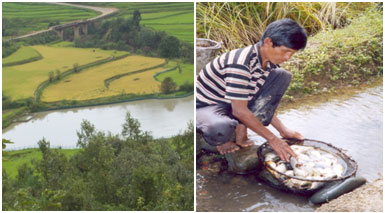 Figure: A rice-fish farming system in hills of Manipur

Another demonstration was undertaken at Purulvillage of Senapati districts of Manipur which comes under hill (Figure 3). An area of 2500m2 of cultivableterrace plot was taken for paddy-fish farming. The peripheral dyke height of the paddy plot was 1.5 ft where circular refuge of 1.5m dia and 1m depth was constructed for fish shelter. Local paddy variety Ruoraiwas transplanted in the paddy field.Other farmers of the nearby paddy plots have transplanted paddy varieties like, Kithou,Riikhamairuand Dziikaorou etc. in paddy-fish farming systems.1000 nos. of Common carp, Cyprinuscarpio fry at the stocking density of 4000 nos/ha of 5.4+0.2cm in size and 7.3+0.4gminweight was stocked. Manuring was done as per the standard local practice.No supplementary feed was provided for feeding of fish and the feeding was entirely dependent on the natural food available in the paddy plots.Paddy cultivation was for 150 days. However, fish cultivation was for 270 days, because the fish cultivation was continued for another 120 days after the paddy harvest to have a better growth. A total of 680 nos of fishes were harvested of varying size of 20 +0.5cm and 520.5+2.3gm of weight with 68% survibility. A total of 354Kg of fish was harvested @ 1416Kg/ha. Paddy of 1.5 ton of was harvested from the plot @ 6.0 ton/ha. Rs 9,375/- was generated from the paddy cultivation, whereas an additional income of Rs 24,780/- was generated from fish culture in the paddy field without any additional expenditure for inputs for fish farming except fish seed.

Climbing perch Anabas testudineus locally called as ‘Ukabi’ is a small sized food fish in Manipur. This fish exhibits obligatory air-gulping behavior and omnivorous in habit. Climbing perch appear to be visual feeders, feeding primarily during the day. The fish has a wide range of distribution in the fresh waters and is prevalent in the derelict and swampy waters. Because of reduced abundance in the wild fish is presently categorized as vulnerable. Although culture, breeding and larval rearing technology of the major carps has been developed for the decades, other species having commercial importance like Anabas testudineus have been ignored. Among air breathing fishes A. testudineus is considered a delicacy in the eastern and north eastern India and demand for this fish is very high for its prolonged freshness out of water and a valuable diet for sick and convalescent. The present market value ranged from Rs. 300 to 400 per kg in Manipur.

The first reports concerning attempts at artificial hypo phyation of climbing perch, Anabas testudineus were published in the 1970s. But, there is no report   regarding induced breeding of Climbing perch from Manipur. A successful attempt for the first time has been made by the group of fishery scientist namely; Pronob Das, B. K. Behera, N. Sorangmba and B. Singh from Manipur for induce breeding of Climbing perch with synthetic hormone forconservationandaquaculture. The technology is available with KVK (IW), ICAR Research Complex for NEH Region, Manipur Centre, Imphal. Seed will be available in commercial scale from coming year (2009) from our centre. 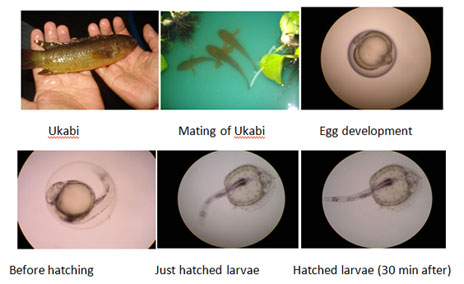